Jas enterprise is the name giving full emphasis on nutrition, quality, health and most importantly customer satisfaction. We have the most efficient pulses processing plant with latest technology machines and professionally qualified personnel to provide you with the most nutritious pulses processing plants. The prices at which we give our nutritious pulses processing plants are very reasonable. This helps one to easily avail our healthy pulses that are a result of our dedicated work and precise techniques.
Any Indian cuisine cannot be imagined without pulses. pulses are one of the highly consumed eatables in India. This is accredited to its palatability and nutritious quality. pulses are the major source of proteins in one's diet. Hence, they are a must for people of all ages, are especially children in order to attain optimum growth.

Although dal generally refers to split pulses, whole pulses are known as sabùt dals and split pulses as dhuli dals. The hulling of a pulses is intended to improve digestibility and palatability, but as with milling of whole grains into refined grains, affects the nutrition provided by the dish, reducing dietary fiber content. pulses with their outer hull intact are also quite popular in India and Pakistan as the main cuisine. Over 50 different varieties of pulses are known in India and Pakistan. 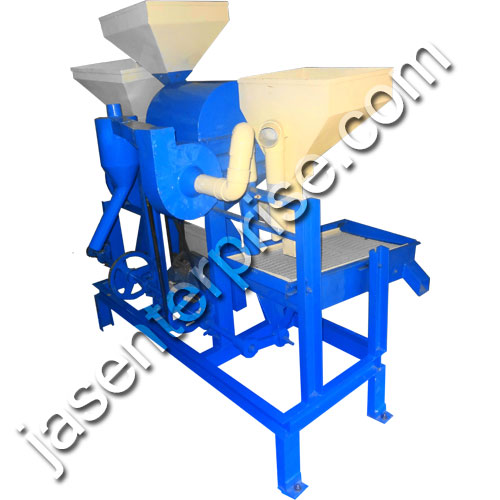 pulses are basically grain legumes. They occupy an important place in human nutrition due to their high protein content than cereal grains. In Indian dietary regime it occupies an important place. Since majority of Indians are vegetarians, they depend largely on grain legumes (pulses) for their dietary protein. Legumes contribute a major portion of lysine in the vegetarian diet. They are also a fairly good source of vitamins like thiamine, machine, riboflavin and much needed iron. Therefore its quality availability to the common man is a major challenge. Since recovery was poor in traditional technologies, adoption of modern technology will go a long way in meeting the need of the common man.
Jas enterprise offer mini dal mill machine. This mini dal mill is simple in construction and easy to operate, maintain and available at very low cost. Mini dal mill machinery consist of horizontal tapered roller is covered with emery coating, surrounded by a screen through which the husk is discharged. The shelled pulses are passed through an aspirating fan on the oscillating sieve unit, where appropriate grading of pulses is done. It is run by automatic arrangement are made for collection of de husked and split pulses, un husked and split pulses, un de husked pulses, broken, husk in separate containers and bags. This machine offers dust free operation, does not cause pollution, retains proteins, natural shine et cetera.

This mini dal mill is simple in construction and easy to operate and maintains. It has been developed for de husking and splitting of food legumes viz. Pigeon pea gram and black gram. It consists of horizontal tapered roller the roller is covered with emery coating surrounded by screen through which husk powder is discharged. The shelled dals pass through aspirating fan on oscillating sieve unit where appropriate grading of dals is done.
The vibratory sieves are provided with different size holes to match the requirements of the type of dal being processed. The vibration are included a cam operated link which is mounted on a counter shaft (motor derived shaft) with this mini dal mill Jas enterprise is provided paddle type screw mixer in all mild steel construction with worm shaft.

Basic processes in dal milling are cleaning, grading, conditioning, de husking, splitting, and separation, polishing and bagging. Major variation is involved with de husking process only. Sometimes linseed oil is also used during dry milling operation to impart shine or better appeal to the milled dal.
The removal of the outer layer of husk and splitting the grain into two equal halves is known as milling of pulses. To facilitate de husking and splitting of pulses alternate wetting and drying method is used.

Flow diagram for milling of pulses

This unit consists of a vibratory inclined sieve, hopper, grain collector, waste collector and motor. The vibratory sieves are providing with different size holes to match the requirements of the type of dal being process. The vibrations are inducing by a cam-operated link, which is mounts on a motor driven shaft.

An emery roller machine is used for cracking the husk layer and for scratching of clean pulses passing through it. This is done for loosening the husk from sticking to the cotyledons in order to facilitate subsequent oil penetration in the following unit operations. Gradually the clearance between the emery roller and cage (housing) is narrowed from inlet to outlet. Cracking and scratching of husk takes place mainly by friction between pulses and emery as the material is passed through the narrowing clearance. During the operation some of the pulses are de husked and split which are separated by sieving.

Pretreatment with oil and water:

A screw conveyor allows passing the scratched or pitted material through it and mixing of some edible oil like linseed oil is complete. The linseed oil is use at the rate of 1.5 to 2.5 kg/tones of pulses (please refer our guideline for lintel). These are keeping on floors as required to diffuse the oil.

De-husking and splitting of dal:

For de husking of conditioned pulses emery stone coated emery rollers are used. In one pass about 50-75% of pulses are de husked. De husked pulses are split into two parts. De husked split pulses are separated by sieving and the husk is aspirated off. Anti shoplifting pulses and tail pulses are again de husked and milled in a similar way. For complete de husking and splitting the whole process is repeated two to three times.

To obtain best results during de-husking and splitting of pulses in the pulses de husking machine in Jas brand mini dal mills, latest model improved version, pre milling including grading of pulses size wise is very essential.
The raw pulses are first clean of dust, chaff, stones and other extraneous materials. Sieves grade cleaned pulses or pulses graded and soaked in water in cement's tanks having 6" depth. Height of pulses soaked is 5" and the water level should be 1" above the pulses.
Soak pulses are taken out of the water after specific time and put on the sieve. Swollen pulses which do not pass through sieve (from which un-swollen pulses earlier passed through the same) are ready for heaping in shade whereas the pulses which pass through the same sieves. Then these pulses are ready for heaping in shade. Degree of happing of swollen pulses in shade should be 30 to 40. This process should be continuing until the pulses are swill to the desired extent.
There after the pulses are in thin layers in the open sun drying. Duration of sun drying of pulses vary according to weather condition prevailing at the time of processing.
After sun drying, the pulses are again heap in shade so moisture contents in the pulses may become uniform as need in them for de-husking.
Then the pulses are graded again fed in to the pulses de husking machine in Jas mini dal mill in graded lots to achieve he best results with minimum brokenness.
For the guidance of the entrepreneurs, the process of details of pre-milling of pulses after proper cleaning is show here after in a tabulated chart.
Note: -

Further process details of pulses at sr. nos. 5a, 5b, 6a and 6b Moong (Green Grams) and Urad (Black Grams)

Dehusking and splitting of per-conditioned pulses per hour

Get Instant E Quotation WhatsApp Us

Our Range Of Products